We were on a journey in the Holy Land. Our party paused in a tiny village, supposedly the place where the « ten lepers » begged Jesus for healing… The people came surrounding us, thrilled that a bus had come to their village, for, they said, the last visit of pilgrims was five years before us!

Was there any catholic church in the place?… We were eventually directed to a shabby looking kind of shelter, which happened to be… the catholic church. The door was locked.

A man was passing by. He approached us. On hearing that we were christians, he invited us to his small orthodox church: a low ceiling cave which smelt of incense and prayer. Bunches of thin candles were burning before smoke darkened icons. Our host explained to us that this was the very place where the ten lepers had met with Jesus.

The man was so intense in enacting the scene, that we had read and heard so many times, that we felt as if Jesus had just departed from there. As he was depicting the well known episode, he became so deeply involved in it that he ached with indignation, and cried to us: « And only one came back to thank the Lord ! Only one out of ten!… Only one!… And he was a Samaritan!… »

The man was obviously so saddened and hurt for Jesus’ sake, that his pain reminded me of Jesus’ words to Margaret Mary, in her Visitation Convent: «  Look ! Here is the heart that loves you all so much… and yet… » Our orthodox brother was so thorougly at one with the Lord’s sorrowful remark, that we could feel what a compassionate love means. We were so moved that, spontaneously, our group exploded into a heart felt « Kyrie eleison! Christe eleison! Kyrie eleison!… » in the welcoming humble orthodox church. Our voices, as one only voice, in that kind of grotto, where once lepers were kept apart from the village folks, resounded with a poignant, supernatural beauty. 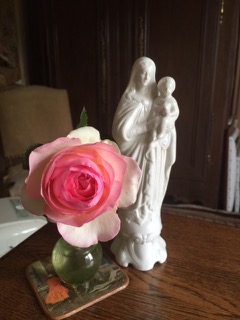 A bunch of onlookers, attracted by our singing, were standing outside, listening… As we slipped out, still filled with the great peace of that exceptional experience, one of the young onlookers, a muslim boy, came up to me and offered me… a rose!

Among the party of 30 people, it was the priest that he willed to thank. I was stunned. I took the rose from his hand, as a token sent by God. Here, Jesus had cured a Samaritan. Here, a Muslim turned to the Christian pilgrim, in sheer gratefulness… The gesture was a powerful one. I accepted the flower, and I prayed that the young muslim boy might one day discover the living Christ, and – why not? – even become His priest… Since I did not know the man’s name, I decided to call him Shamir.

The rose of Shamir, in the hotel room, that night, and in the following days, remained astonishingly fresh and fragrant… I watched it every morning, until we took our flight back to France. « The Rose of Shamir », still addresses me today, as a sign of Jesus’ infinite love and mercy to all men of good will.

A soul is well worth a tooth!