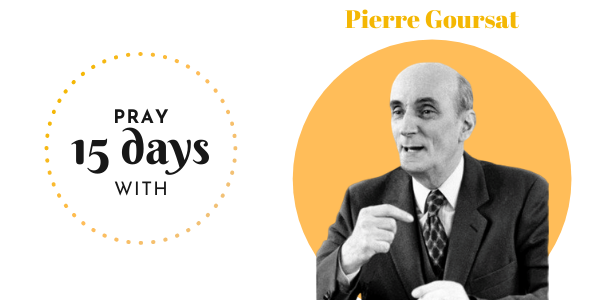 There is not one among us who was converted in the Emmanuel group and said to us: “I have found Jesus, but I don’t want to enter the Church. “No one has told us this because in discovering Jesus, he discovered the Church from within, the Holy and Immaculate Church, the Bride of Christ (E011).

Thanks to Father Lécailler whom he met on the Plateau d’Assy after his conversion in 1933, Pierre Goursat discovered the beauty of the Catholic Church, which he loved from then on like his mother. Lucid about the seriousness of the crisis the Church was going through, Pierre always kept an attitude of hope, convinced that the Holy Spirit was unfailingly guiding it. Knowing the history of the Church well, he knew that God had brought about spiritual renewal in various times of crisis.

He compared the prayer groups of the Charismatic Renewal, born in the spontaneity of the Holy Spirit, and poorly structured, to the Mendicant Orders advocating poverty, which had developed in the 12th century. The “communities of life” that emerged from these prayer groups were more reminiscent for him of the Benedictine monasteries of the High Middle Ages which, supported by a solid organization, had established a rigorous rhythm of life, peace and moderation in Europe (cf. IEV28).

Profoundly Catholic, Pierre Goursat put a lot of energy into ensuring that these prayer groups and “new communities” were deeply rooted in the Church. He helped the Renewal, then very marked by its Protestant origins, to ‘catholicize’ itself: The Lord has made us grow in the heart of His Church, strengthening us in what is essential to the Church: the Eucharist (M21). Pierre deplored the excesses of clericalism, but he had an unfailing attachment to the Magisterium : “When we obey the Church, we have all the treasures of the Church. In our obedience, throughout the whole community, [we benefit] from all the prayers of the Church, from all those who pray and suffer day and night for souls “(E035).

In his youth, Pierre Goursat chose to remain a layman rather than become a priest as many advised him to do. He decided to dedicate his life to God by being involved in the world to be closer to people. As Emmanuel Community’s leader, he was a pioneer in implementing the main intuitions of the Second Vatican Council, which had emphasized the specific vocation of the laity and the complementarity between the ministerial priesthood and the common priesthood of the baptized.

Pierre Goursat raised a generation of lay people who were well formed spiritually and doctrinally, animated by a great love for the Church. He was also at the origin of a new form of priestly life, adapted to our times. Pierre was convinced that priests, often very isolated, needed a strong spiritual and fraternal life in order to exercise a fruitful ministry and to overcome the temptations of discouragement and dullness.

Pierre Goursat thus encouraged the blossoming of a large number of vocations and was able to convince the ecclesiastical authorities to draw up canonical statutes, unheard of at the time, allowing diocesan priests to belong to an association of the lay faithful, alongside families and lay people consecrated in celibacy. The statutes of the Emmanuel Community, which Bishop Lustiger approved in 1982, were recognized by Pontifical right on 8 December 1992.

Pierre prayed that the Church would find a new missionary impetus. He wished that the members of the Community could together, in the complementarity and solidarity of their states of life, serve the universal Church as well as the local Churches. He believed that parishes should be constituted as living missionary poles to reach the greatest number, especially those furthest from the faith.

Pierre Goursat rejoiced when the first parish, the Church of the Trinity, was entrusted by the Archbishop of Paris to priests of the Community in 1986, sensing that many others would later be entrusted in France and in the world.

I beg you, my brothers, understand that the Renewal is a “charismatic” renewal, it is a spirit of Pentecost, we must truly understand this (E008).

The Holy Spirit is the “soul” of the Church, which is the Body of Christ; He breathes life into it, assures its communion, vivifies it, renews it and rejuvenates it unceasingly. The Holy Spirit acts in many ways, especially through “charisms” which are “special graces” (cf. Lumen Gentium, n. 12), gifts which God freely bestows on the faithful, distributing them to each one as he sees fit (cf. 1 Cor 12:11) so that they may cooperate with His plan of salvation.

The Apostle Paul defines charisms as follows: “To each one the manifestation of the Spirit is given for the common good” (1 Cor 12:7). Charisms are given to build up the Church and to serve Her in the best way possible according to needs:

It is a Renewal for our time which leads to new services, to new ministries, according to the charisms which are given to each one by the Spirit and recognized by the Church (EN6-7).

Charisms are a manifestation of charity and at the service of charity. They must always be authenticated by the Church: “Do not extinguish the Spirit, do not belittle the gifts of prophecy; but verify all things: hold fast what is good” (1 Thess 5:19-21). Charisms are very diverse, related and interdependent, and they confirm each other. Pierre Goursat encouraged the exercise of charisms, having personally received that of discernment which enabled him to govern the Community with wisdom and clear-sightedness.

Pierre longed for the unity of the Church, a unity which is expressed in the diversity of vocations and charisms. At times he had to oppose the concept, then widespread within the Charismatic Renewal, that tended to reduce unity to uniformity. Pierre had friendly relations with many Protestant pastors whom he invited to give lectures during the sessions of Paray-le-Monial. He was a supporter of an exacting ecumenism, lived in the respect of the identity of each one, which does not erase the differences between Christian confessions:

The first thing to be ecumenical is to love one’s Church. And then to love one’s Protestant brothers. And to suffer from the division. You have to put love in the first place. Really, have compassion (E037).

Through the intercession of Pierre Goursat, grant me today Lord, to exercise charity in a concrete way and to renounce the spirit of criticism.