Pope Francis’ homily on Tuesday, January 28th confirmed the importance of praise, one of the pillars of the Emmanuel Community.

The Holy Father spoke about the proper attitude of the Christian at prayer.

Reflecting on the episode from the Second Book of Samuel, in which “David danced with all his might before the Lord,” Pope Francis recalled that the whole people of Israel were celebrating because the Ark of the Covenant was returning home. He went on to say that David’s prayer of praise, “led him to move beyond all composure,” adding, “this was precisely a prayer of praise.”

He also pointed out how Sarah, Abraham’s wife, who, after giving birth to her son, Isaac, said, “The Lord made me dance with joy.” He stated that many of us are familiar with prayers of petitions – asking something of the Lord – and prayers of thanksgiving, as well. Even prayers of adoration, he said, “is not so difficult,” to understand. Yet, prayer of praise, however, “We leave aside – it does not come to us so easily…it’s not as spontaneous!

Many equate praise with those charismatic folk… something not really necessary for all Christians!” But the Holy Father says “No! Prayer of praise is a Christian prayer, for all of us! We experience it in the Mass, every day, when we sing the Holy, Holy, Holy … This is a prayer of praise: we praise God for his greatness, because He is great. We say beautiful things to Him, because we happy for His greatness.

Many Christians find it easy to cheer their favorite sports team but have a difficult time praising the Lord. We must come out of our shell he went on to say. It should be gratuitous! In this type of prayer we do not ask God for anything; we do not express thanksgiving, we simply praise him!

It is also a necessary prayer because we acknowledge God’s greatness! He is our God. “David”, Pope Francis went on to observe, “was so happy, because the ark was returning, the Lord was returning: his body, too, prayed with that dance.” Our entire body worships the Lord through praise. Our voices proclaim His greatness, our hands are extended up towards the heavens in exultation and we lift our hearts to join Him who is all good and merciful!

The Pope further stated that we must sincerely ask ourselves if we know how to praise. How is it that we praise the Lord during Mass? Are we merely repeating words out of habit or are we really praising the Lord because He is Holy and He is worthy? “The joy of praise,” said Pope Francis, “leads us to the joy of the feast – the feast of the family.” The Pope went on to recall how, when David returned to the palace, Michal, the daughter of King Saul, scolded him and asked him if he did not feel ashamed for having danced like that in front of everyone, he, who is the king. Michal “despised David”: 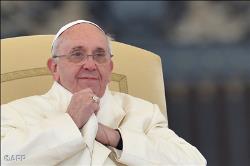 “I wonder sometimes how many times we despise good people in our hearts, good people who praise the Lord as it comes to them, so spontaneously, because they are not cultured, because they do not follow the formalities?  The Bible says that, because of this, Michal remained sterile for the rest of her life. What does the Word of God mean, here? [It means] that joy, that the prayer of praise makes us fruitful! Sarah danced in the great moment of her fecundity – at the age of ninety! The fruitfulness that praise of the Lord gives us, the gratuity of praising the Lord: that man or that woman who praises the Lord, who prays praising the Lord, who, when praying the Gloria is filled with joy at doing so, and who, when singing the Sanctus in the Mass rejoices in singing it, is a fruitful person.”

On the other hand, warned Pope Francis, “Those, who are closed in the formality of a prayer that is cold, stingy [It. misurata], might end up as Michal, in the sterility of her formality.” The Pope asked, then, [that we] imagine David dancing, “with all his might before the Lord,” and that, “we think how beautiful it is to make the prayer of praise.” It will do us good, he said, to repeat the words of Psalm 23, which we prayed today: “Lift up your gates, O ye princes, and be ye lifted up, O eternal gates: and the King of Glory shall enter in. Who is this King of Glory? The Lord of hosts, He is the King of Glory.”

The Triumph of the Cross of Christ found in Love!

Jesus, We Trust in You!

Forget None of His Kindnesses