The Cause for the Canonization of Pierre Goursat will soon be on its way to Rome! 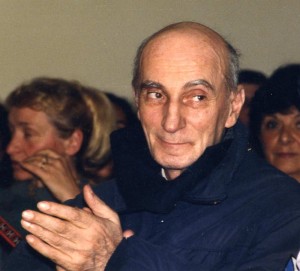 In light of Pierre Goursat’s anniversary two days ago, here is an article from the Community International newsletter:

Over six years have passed since the opening of the Cause for the Canonization of Pierre Goursat on 7th January 2010. The team had been busy looking for documents and receiving evidence in order to prove the reputation for holiness and the heroic virtues of the Servant of God. This helped create a large dossier of approximately 12,000 pages.

This dossier is mainly composed of the following:

All official acts since the beginning of the process: the correspondence with the Congregation for the Causes of Saints in Rome, the nomination by the Emmanuel Community of a Postulator, correspondance with the Archbishop of Paris and the members of the Commission of Inquiry, minutes of hearings of witness etc.The documents in the file proving the reputation for holiness of Pierre Goursat:

The documents in the dossier proving the heroic virtues of Pierre Goursat:

A report by three expert historians on the life and work of Pierre Goursat.

A report by two expert theologians on the corpus of teachings of Pierre Goursat – mostly transcriptions of recorded teachings.

After consulting the promoter of justice, Father Xavier Rambaud, guarantor of the validity of the procedure, the postulator, Father Francis Kohn and Bishop Georges Soubrier, the episcopal delegate for the cause of Pierre Goursat, decided to proceed with closing the diocesan inquiry, judging that the file was enough to send to Rome. The official closing session, open to all the faithful, will take place in Paris on Saturday, December 19th, 2015 at 10am in the Church of the Holy Trinity in Paris.

To be in joy we must be together as three or four and carry the burden of each other – in that way ‘the yoke is easy and the burden light’. So I always repeat the same thing: love one another – I am completely infantile, like St. John – love one another, and then all will be well. (Interview, March 13, 1976) 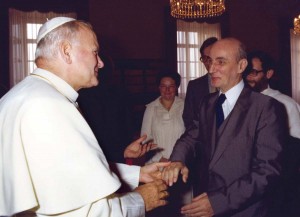 Soon, the second step will be carried out in Rome by the Congregation for the Causes of Saints. All documents submitted will first be examined and if the Roman dicastery considers that the procedure has been followed in every detail during the diocesan phase, work will begin on the Roman phase. A ‘relator’ will be appointed supervisor, overseeing the work of the postulator during this second stage. The postulator will be responsible for drafting the Positio which will present an argued summary with historical and theological components from the evidence gathered (testimonial and documentary).

Next, the case will be examined by an expert commission of the Congregation for the Causes of Saints and then by the Cardinals, and if they agree, the Pope should be able to recognize the heroic virtues of Pierre Goursat so that he may be declared Venerable. Thereafter, the account of a miracle will need to be presented so that he might be declared Blessed, and then a second miracle will be needed for him to be proclaimed a Saint.

Note that for a cure to be recognized as a miracle, it must be a cure of a serious organic disease, that the healing is inexplicable in the present state of science, that the healing is immediate, complete and directly related to the intercession of the Servant of God. During this second phase, it is important to continue to demand graces from the Lord by praying regularly to Pierre Goursat and to send to the postulator’s office your dated and signed testimonies of graces received.

Prayer for the beatification of Pierre Goursat

Lord Jesus,
We pray for the beatification of Pierre Goursat.
Inspired by a fervent desire for the salvation of souls and a great love for the Church, he worked with faith and hope for the Church’s spiritual and apostolic renewal. Lord, through his intercession, grant us the grace of trusting you fully, serving you generously and doing your will.

Give us a heart which is open to adoration and overflowing with compassion for all people. Set us ablaze with fire and love for the evangelisation of the world.

Lord, through the intercession of the Servant of God Pierre Goursat, we ask you with insistence to grant many favours to all of our brothers and sisters in humanity, especially the poor and those wounded by life. Lord, console the afflicted, strengthen the weak, heal the sick! In a particular way, we entrust to you…

Lord Jesus, to those who are far from you or who do not yet know you, we ask you to reveal the infinite love of your meek and gentle Heart.

If you have received graces and favours attributable to praying to Pierre Goursat, please contact:
The Cause for the Canonisation of Pierre Goursat
6 place de la Mairie, 37220 Chézelles, France
causepgoursat@emmanuelco.org
+33 (0)2 47 58 57 51
Previous Article

0
International Newsletter March 25, 2016
No Comments Yet