Fr. Andrew Brinkman was installed as pastor of Our Lady of Guadalupe parish in St. Paul on Sunday, July 15th. Before then, he had been serving as the parochial administrator since November of 2016. Although the change in title doesn’t change practically in his service of the parish it now establishes that the Archbishop has entrusted this parish to the spiritual fatherhood of Andrew and will keep him there for a six-year term. 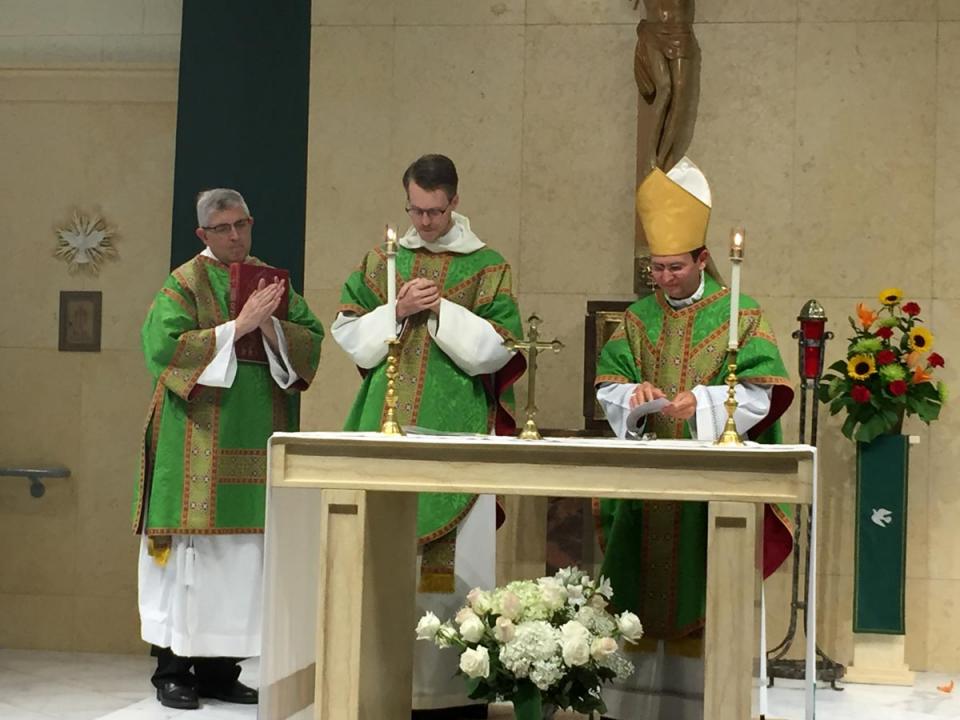 The installation occurred at a Sunday Mass celebrated by Auxiliary Bishop Cozzens, with Fr. Kevin Manthey and Fr. Andrew as concelebrants. The local brothers and sisters joined the brother priests for the Mass, which was interesting because it ended up being a Spanish Mass. All the non-Spanish speakers handled it well, although the kids had a harder time staying focused!

For those who have never attended an installation Mass, it proceeds as normal, with the addition of the installation ritual following the homily. Bishop Cozzens called Andrew forward and the two of them stood behind the altar. Andrew had to place his hand on the book of the Gospels while he professed his belief in the Creed, all that is taught by the Church through Scripture and Tradition and by the Pope and the College of Bishops in union with him. Then Bishop Cozzens and Andrew signed paperwork which officially makes him the pastor of the parish corporation and the very oath of fidelity that he just made orally on the altar and the Mass continued. Jacqueline, Katie, and Heather sang Emmanuel’s version of the Pange Lingua as a second communion song.

After communion, Andrew gave a small testimony of his call to the priesthood. He shared that from the age of nine, he was haunted by the idea of being called to the priesthood. Eventually he went to World Youth Day in Toronto, where the witness of St. John Paul II began the conversion of his heart. Andrew returned to Michigan and began to pray the rosary daily. He also signed up for Eucharistic Adoration when his parish started that about six months later. In the course of that post-WYD year, Andrew realized that he wanted to bring other people to the love of Jesus which he himself had experienced. He applied to the seminary and the rest is history!

The parish hosted an outdoor reception of street tacos, rice, beans, and cake after the Mass. It was a hot, humid day so people moved their tables to follow the shade. When the food was eaten and the heat was getting to us, the Emmanuel Community members and Andrew’s dad, Ron, went to Andrew and Kevin’s rectory for a post-reception social. The dining room table was covered with dips, cheeses, crackers, sweets, and drinks and the conversations continued. Andrew was honored with toasts and speeches at some point and then we prayed over him to prepare him for his role, just as Paul and Barnabas were prayed over by the Church in Antioch before being sent on mission (recognizing, of course, that our “laying on of hands” did not have the power of ordination). Eventually the Irlbeck’s showed up with their two-day-old baby and all attention turned to them. Finally, around 8 pm the party dispersed.

It was a good day.

God was always there