Saturday, December 9th, members of the Emmanuel Community all over the world (including us in Alpharetta / Gainesville GA) experienced the renewal of the Consecration of the Community to the Hearts of Jesus and Mary.

The solemn consecration ceremony took place in the Sanctuary of L’Ile- Bouchard.

Many of you may not have even heard of L’Ile-Bouchard and may be wondering why the solemn consecration ceremony took place there.

For New Year’s Eve, our family was fortunate enough to spend a few days not far from L’Ile-Bouchard. So, we are going to tell you the story of the apparitions of Our Lady in the little village of L’Ile-Bouchard 70 years ago.

Europe in 1945 was politically unstable; in fact, it was a mess. Many countries were badly damaged by World War II and despite strong military and financial support from the US, and others the Soviet Empire began to expand and the Communists in France were on the verge of revolutionary success.

In the small village of L’Ile-Bouchard lived four young girls who went to the same school run by nuns. On December 8th, on the feast of the Immaculate Conception, the girls were encouraged by the nuns to pray especially for France who was collapsing towards a civil war. So, during their lunch break, they went to pray in the nearby church.

As the girls were saying a decade of the Rosary, a sudden light appeared, in which they saw Our Lady, whose hands were joined in prayer. She had rosary beads draped over her right arm and she was standing on a rock. Just below the rock were the following words spelled out in golden letters: “OH MARY, CONCEIVED WITHOUT SIN, PRAY FOR US WHO HAVE RECOURSE TO YOU” (the same Invocation that is carved on the Miraculous Medal). The archangel Gabriel was kneeling next to her and he was holding a flower in his hand. 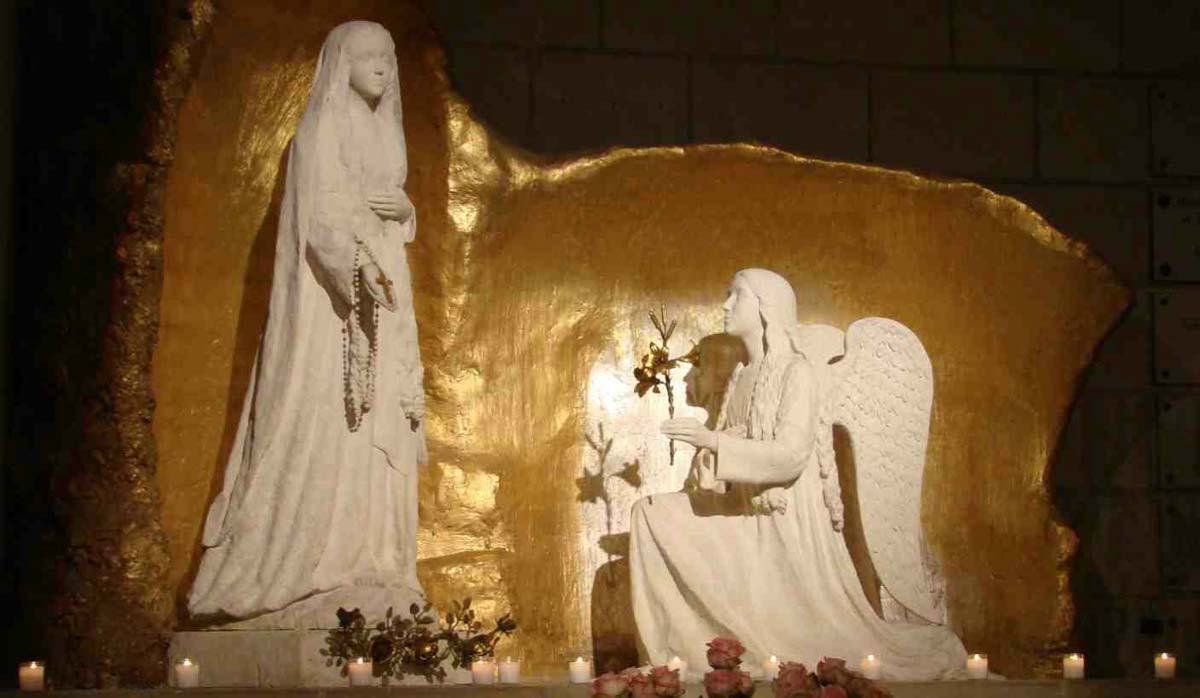 Our Lady appeared seven days in a row and all the children of the school believed in the apparitions and they followed the instructions of Our Lady.

They prayed hard for peace in the country.

And on the fifth day, the Communists called off the general strike. All went back to work, and all hostility suddenly disappeared. The Archbishop stated that it was a miracle. They had been preparing for the worst. The cloud of despair and danger had miraculously and suddenly vanished. The prayers of the children had brought back peace!

The adults did not believe in the apparitions until Our Lady performed a miracle on the fourth day. She healed Jacqueline’s eyes which had been impaired since birth. And on the last day she sent a bright ray of sunlight that thousands of people witnessed.

Our Lady made a wonderful promise, she said to the children:

I will bring happiness in families.

And she insisted again and again on how prayer can bring peace to the world.

I came here to ask you to pray a lot.

Continue to pray the rosary.

It pleases Our Lady so much when we say “Hail Marys”. Jaqueline said: “The more we prayed the more beautiful Our Lady was”. So let us, with our kids, pray for the United States and for peace in the world.

May we thank Our Lady for the Happiness she gives to our families and ask her to give the happiness, she promised, to all families, especially those who are struggling.

Jaqueline died only a couple of years ago so a DVD is available with her testimony in English and in Spanish!

Our sister published her first book