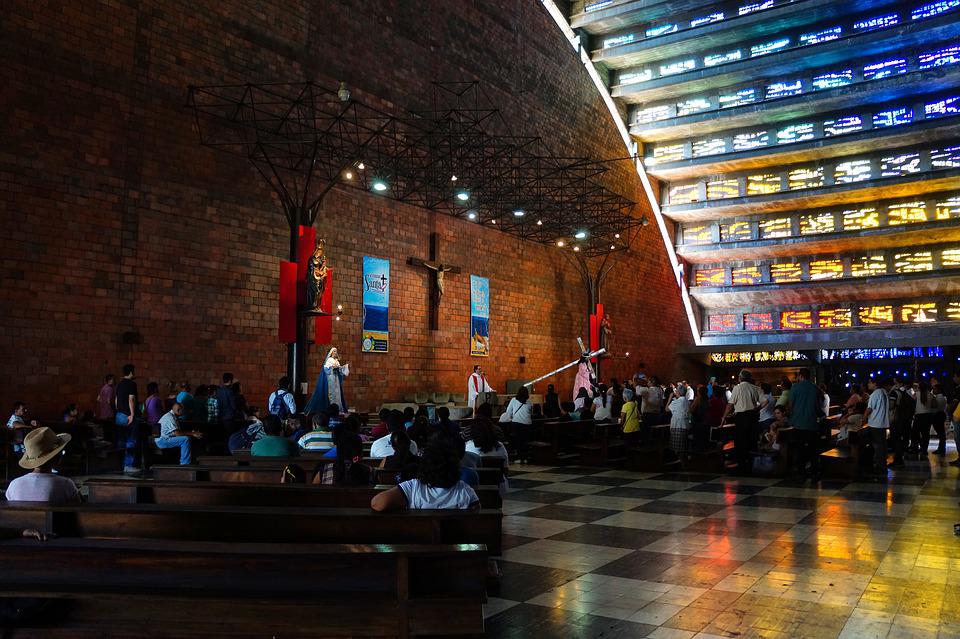 When we came from France, 11 years ago, we started attending mass at the French parish in Washington, DC (St Louis de France) and at the closest American parishes. We wanted to inculturate. Then two of our children attended a Catholic American school (St Jane de Chantal, in Bethesda, MD), and the immersion became more serious.

Of course the mass itself is the same (what a blessing!): whether you understand the language or not, you can still do the Sign of the Cross and share the Peace of Christ with people sitting around you. More importantly, when you receive the Eucharist, there is only one way to open your heart and humbly welcome Our Lord…

The liturgy in the American parishes we discovered is meticulous and quite traditional, compared to the French ones we knew: entrance procession led by the golden Cross, people kneeling during Consecration, altar servers at work to shake the bells. We got used to answering correctly in English, following most of the homily and even the jokes. So it’s not about the language. It’s about the atmosphere.

Here is the big difference: after the Offertory procession, we can very often hear distinctly the priest thanking the children who brought the wine and the bread: “Good job, guys!”, sometimes thumbs up, even if they are tiny little girls walking slowly down the aisle. And when they go back to the pew, their teacher welcomes them with a big smile and a hug: “You did a really good job!”

One day, two very little girls become so shy during the long walk down the aisle that they walked more and more slowly, and the priest came to them his arms open with a good smile, the rest of the assembly tenderly smiling.

Another day, two little girls wanted to act quickly and one of them almost ran to the priest, who welcomed her kindly and whispered: “You won!”

Every child receives encouraging words. Nobody gets angry (even when the cover of a cup falls noisily on the floor), nobody looks unkindly at little ones making a mess (yet God knows what mess they can make…), children are allowed to come and go, and there is this marvelous “crying room” for inconsolable babies and exhausted parents.

The most important thing is to “do a good job” for the Lord according to your abilities, and when the time comes they sing or read beautifully and make the greatest liturgy to honor Him.

Household isn't only for spiritual sharing